Observations on Lioness: Golda Meir and The Nation of Israel

This post is part of The Exchange. The opinions expressed by contributors shared on The Exchange do not necessarily reflect the policies or positions of CIJA, its staff, or Board of Directors.

One of my favorite movies is Field of Dreams, a fantasy/dramatic adaptation of Shoeless Joe, a novel by Canadian author W. P. Kinsella. Despite a well-documented special relationship between American Jews and America’s national pastime of baseball, one might quite naturally ask why in the world a baseball movie set in Iowa has any place on The Exchange, let alone in the following observations about the latest biography of Golda Meir.

Ray Kinsella (a character played by Kevin Costner in the movie) tries to enlist Terence Mann (played by James Earl Jones) to participate in the baseball quest at the heart of the story. He asks Mann whether he misses being involved. Read Mann’s reply:

I was the East Coast distributor of “involved.” I ate it, drank it, and breathed it…Then they killed Martin, Bobby, and they elected Tricky Dick twice, and people like you must think I’m miserable because I’m not involved anymore. Well, I’ve got news for you. I spent all my misery years ago. I have no more pain for anything. I gave at the office.

To paraphrase the fictitious Mann’s response for present purposes, when it comes to Zionism and the State of Israel, Golda Meir was a “worldwide distributor of involved.” In her lifetime (1898-1978), Meir served in a dizzying array of capacities and participated in innumerable significant events that led up to the foundation of the modern State of Israel on May 14, 1948, and then for the first 30 years of its national life.

Francine Klagsbrun (in her own right a remarkable person) goes into great detail (the book is 824 pages) about Meir’s peripatetic and action-packed life, and generally writes from a sympathetic and almost affectionate perspective. However, Klagsbrun does not shy away from Meir’s family and marital issues, her poor Hebrew skills, her health issues, her strong personality, and the considerable political infighting she engaged in among the leadership of the Yishuv and later among senior members of the Israeli Government.

While many people simply remember Meir in her role as Prime Minister, a brief overview of her career serves to highlight her remarkable life.

Golda Mabovitch was born in Kiev in 1898, and her family soon moved to Pinsk. A significant early memory from that brief time in Russia was of her father boarding up the house in anticipation of a pogrom. Golda later immigrated to America with her mother and siblings to join her father in Milwaukee, where at age 11 she showed early signs of her later “career” of involvement by organizing a campaign to buy school textbooks. When she was 14 her parents tried to dissuade her from attending high school, so she ran away from home and lived with her sister in Denver, and it was four years before she returned home. Intellectual parlor sessions at her sister’s home introduced Meir to topics such as Zionism, literature, women’s suffrage, and trade unionism. It was also in Denver that she met Morris Meyerson, whom she later married and with whom she had two children.

Knowing that she would never be a “parlour Zionist,” she further established her “involvement” credentials by helping to organize a protest march in Milwaukee after attacks on Jews in the Ukraine and in Poland. She turned her parents’ home into a center for visitors from Palestine, including, on one occasion, Yitzchak Ben Zvi (later the second President of Israel) while he and David Ben-Gurion were recruiting across North America for a program called Hechalutz (the Pioneer); Ben-Gurion had fallen ill and so Ben Zvi continued in his place.

She and Morris made Aliyah to Mandatory Palestine in 1921 to live at Kibbutz Merhavia in the Jezreel Valley. Initially, the two were rejected admission as members because it was suspected, likely due to her American background, that Golda would not be willing to do physical labor. She and Morris were eventually accepted as full Kibbutz members, and she made a number of positive contributions to the Kibbutz. But for a variety of reasons, the attempt to live the kibbutz life did not work out well, and the couple eventually moved to Tel Aviv.

Meir became secretary of Moetzet HaPoalot (Working Women’s Council). She later joined the Executive Committee of the Histadrut, and after much hard work and many internal political battles, she eventually became the head of its political department. Among the top leadership of the Yishuv, she succeeded Moshe Sharett to become acting head of the Jewish Agency’s political department. (The British had arrested Sharett during Operation Agatha, a British military crackdown prompted by the kidnapping of six British soldiers by the Menachem Begin-led Irgun.)

Meir was also known for her fundraising prowess. Prior to Independence, the treasurer of the Jewish Agency was concerned about the agency’s ability to raise desperately needed funds from Jews in America. Golda famously raised $50 million, more than six times what had been predicted.

Meir was one of 24 signatories (she and WIZO activist Rachel Cohen-Kagan the only women) of the Israeli Declaration of Independence on May 14, 1948. “After I signed, I cried,” Meir recalled in her biography. “When I studied American history as a schoolgirl and I read about those who signed the U.S. Declaration of Independence, I couldn’t imagine these were real people doing something real. And there I was sitting down and signing a declaration of establishment.”

Bearing the first Israeli passport, Meir was then appointed the first Israeli Minister Plenipotentiary to the Soviet Union, which had voted in favour of the UN Partition Resolution. Her assignment was particularly important because the main source of arms for the Israeli military was Eastern Europe, an area under Soviet control at the time. The post did not work out well, in part because of the incredibly enthusiastic welcome Meir received from Moscow’s Jewish community when she attended the city’s Central Synagogue for High Holiday services. While Joseph Stalin and Vyacheslav Molotov had hoped to cultivate a friendship with Israel to increase Soviet influence in the Middle East, their disdain for religion and nationalist movements proved the stronger force. The end result was a deterioration of Soviet-Israeli relations, and a crackdown on Jewish communal life in the Soviet Union.

Returning to Israel in 1949, Meir was elected to the Knesset as a member of Mapai (and she served continuously in the Knesset until her resignation from political life). From 1949 to 1956, she served as Minister of Labour, where she orchestrated the integration of immigrants into Israel’s workforce, introduced major housing and road construction projects, initiated large industrial and agricultural developments, and saw that new hospitals and schools were built. Meir also helped in the development of Israel’s system of social security, together with the country’s maternity benefits programme and other welfare measures.

From 1956 to 1969, she served as Foreign Minister (the world’s first female Foreign Minister) during particularly turbulent times for Israel – the Suez Campaign in 1956 and the Six Day War in 1967 being but two examples. On the sudden death of Levi Eshkol in 1969, she became Prime Minister of Israel, only the third woman in the world to hold such high office (and the first to be elected to that rank).

Her term as Prime Minister was no less eventful than her service in previous positions. Her government was blamed for being unprepared for the surprise Egyptian/Syrian attack in the 1973 Yom Kippur War. It resulted in a very close-run militarily and a nearly catastrophic toll in battle deaths and other Israeli casualties. 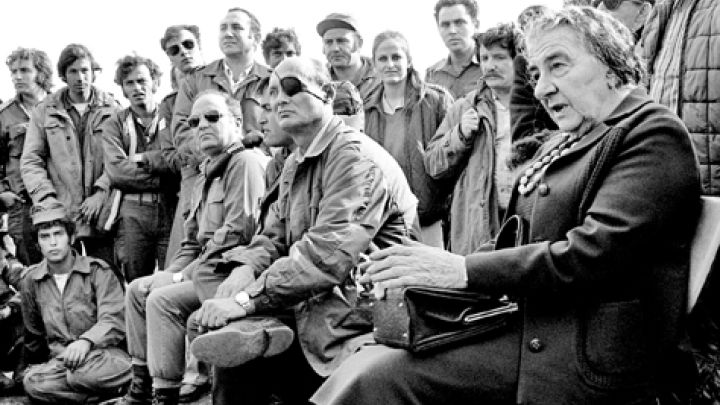 Meir resigned as Prime Minister in 1974 and lived a short but active life in retirement. She died In December 1978 at the age of 80.

The length of the book should not discourage people from reading it. While packed with detail, it moves well and provides a unique history of monumental times in the history of the Jewish people, Zionism and Israel.

I enjoyed rereading many of Meir’s famous quotations, words uttered during her long years of public life. “Let me tell you something that we Israelis have against Moses,” she famously said. “He took us 40 years through the desert in order to bring us to the one spot in the Middle East that has no oil!” My particular favorite is a comment she often made to under-performing colleagues: “Don’t be humble,” she would say, “You’re not that great.”

One cannot read the book without constantly noticing that Meir was often the only woman playing any sort of a role in the events in which she was such a central figure. In his review of Lioness in The New York Times, Ethan Bronner calls Golda’s so-called manliness a “pretence.” He reasons it was “a survival mechanism, pure and simple. There was no model for an ambitious female politician,” Bronner says, “And Meir was not about to devote time to inventing one.” Bronner’s hypothesis seems quite feasible, though he notes that a new study of Meir being written by Boston University law professor Pnina Lahav will analyze Meir as “a victim of sexist mores, a trailblazer, and a role model.”

Readers will find their own takeaways from Lioness. The segment that resonated most with me is the description of Meir’s participation as a “Jewish observer from Palestine” at the infamous 1938 Évian Conference on Jewish refugees in Germany and Austria.

Looking back, she spoke of the Évian conference as a turning point in her life. “I realized then,” she told a young journalist, “that a world which is not necessarily anti-Semitic – because Hitler was denounced at the conference and there was considerable pro-Jewish sentiment – could stand by and see others who were weaker victimized…We can’t depend on any others.”

One group at the conference would have cynically agreed with her. Uninvited, they had come from Nazi Germany as observers. When they returned to Berlin, they informed Hitler that he could do whatever he wished with the Jews. No nation would stop him (page 175)

While Israel is blessed today with allies like Canada, Australia, and the United States, I think that Meir’s observation is as true now as it was in 1938. And this even as a strong, secure and self-confident Israel recently celebrated the 70th year of its renewed national existence.

Which is all to say that another memorable line from the movie classic Field of Dreams has proven true – “If you build it, they will come.” Golda Meir played an integral role in building Israel, and people have indeed “come.”

The opinions expressed by contributors shared on The Exchange do not necessarily reflect the policies or positions of CIJA, its staff, or Board of Directors.